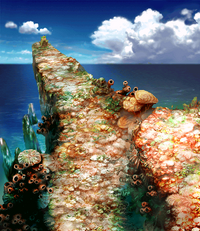 Cape Howl is a location in Chrono Cross. Cape Howl stems from the main El Nido island, jutting out to the sea and containing a few small geysers closer inland.

In Another World, it is selected as the burial site of Serge after he drowned in 1010 A.D. It bears the inscription,

~ Nobody can take ~ anything away from him.

~Nor can anyone give ~anything to him.~

~What came from the sea,~ has returned to the sea.

Serge personally reads this engraving when he comes to Cape Howl to verify that he died in Another World. With forewarning from Lynx, Karsh and the Shaker Brothers confront him at the cape with the intent to take him back to Viper Manor. Kid follows him as well and helps defend against the Acacia Dragoons. Karsh and the brothers beat a hasty retreat. Kid afterward accompanies Serge on his adventure. In Home World, Serge inscribes "Serge and Leena forever" on the stone.