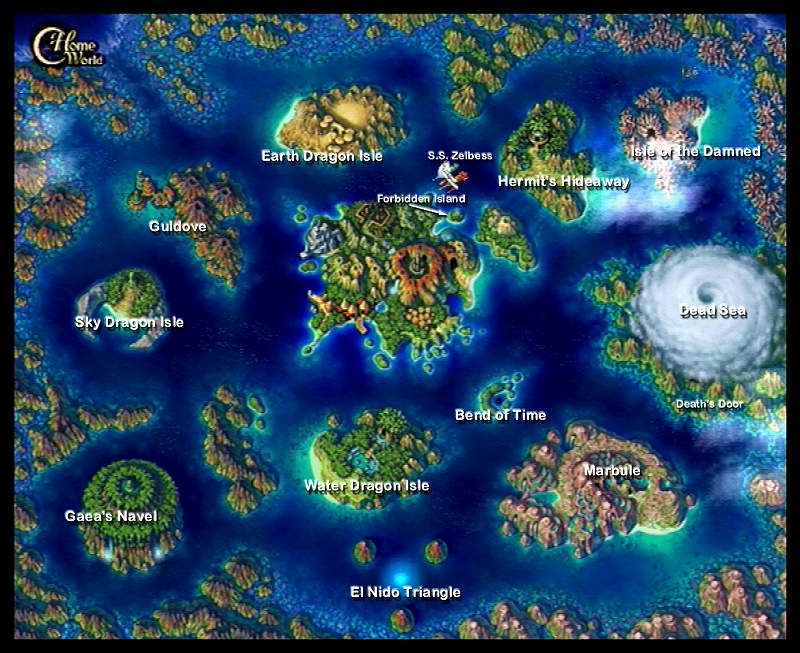 El Nido is the name given to the archipelago situated in a sea encircled by rocks far from the Zenan mainland. Originally, it was simply a sea; no islands existed within the sea save for Gaea's Navel. After 2300 AD, Belthasar located Chronopolis there and constructed the time fortress under the wing of the Central Regime. Specifically, it was built in a subsection of the sea known as the Sea of Eden. There, Project Kid was developed and the FATE supercomputer was constructed and powered by the Frozen Flame. In 2400 A.D., the Time Crash hurled Chronopolis ten thousand years into the past. FATE, desirous of creating its own paradise, began the process of terraforming several new islands in the sea.

Home World is a special dimension that branched off from Another World after Kid saved Serge from being drowned by Lynx in 1010 A.D. FATE's influence on the world, aside from the actions of Lynx, was cut off from this world as the Records of FATE no longer operated. Additionally, in the future, the world suffered destruction at the hands of Lavos, a reversal of Crono's original quest to thwart the alien parasite. This caused the Sea of Eden to become the Dead Sea, a frozen state of the destroyed world with the Home World equivalent of the Frozen Flame sitting at the center, guarded by Miguel on orders from FATE.

How Home World is different from Another World

Another World is the name given to the Keystone Dimension after the dimensions split in 1010 A.D. It can be thought of as the true history of the world; before the dimensions split, it progressed to 1020 A.D. normally. In that year, Kid traveled back in time to save Serge, which caused Home World to split off.

'How Another World is different the Home World

Retrieved from "https://chrono.fandom.com/wiki/Chrono_Cross_locations?oldid=28365"
Community content is available under CC-BY-SA unless otherwise noted.