The following is a list of all the Featured Images on the Chrono Wiki. A new featured image is displayed on the front page of the Wiki monthly. Images are chosen if they are artistically valuable or depict an interesting aspect of the series. 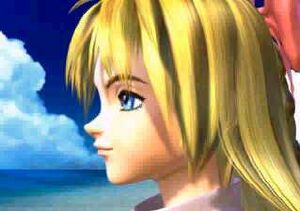 "I know you can't forgive her but...please don't hate mother, or our kingdom."
— Schala

Schala (サラ, ,Sara?) is the gentle, meek, and beautiful princess of Zeal, and a major character in Chrono Trigger and Chrono Cross. 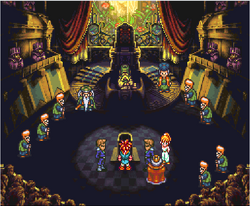 Crono was put into trial for the apparent abduction of the royal princess, Marle. Every action Crono has done during the festival will take place in the trial to show if he was innocent or quilty. Whatever the odds, due to the corrupt Chancellor, you will be sent to jail and sentence to death. Will you try to escape jail or wait it out...?

The Black Omen was once the Ocean Palace that was destroyed by Lavos. In the alternate time-line (post Crono interference), it was transformed into a flying arcology, a temple infused with the near-infinite power of Lavos by using the Mammon Machine. The Omen serves as a final dungeon in the game--where the party was to go through and defeat the wicked Queen Zeal and face Lavos in all its forms.