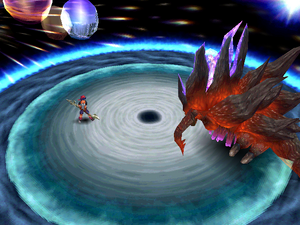 The Darkness Beyond Time is the final wastebasket for timelines nullified by time travel in Chrono Cross. It can be accessed physically as a place, and served as the home of the Time Devourer. Apparently, when Lavos was defeated, he was relegated to the darkness; there, he took advantage of Schala, who had been transported there by the Ocean Palace Incident. He bound with her to evolve into the Dream Devourer (later the Time Devourer), a being that once matured would be capable of consuming space-time. The Dragon God also was sent there somehow after its defeat at the hands of Chronopolis. The Darkness Beyond Time's mechanics are largely theorized, however; it is stated that when timelines are nullified, they end up in the Darkness Beyond Time. In the final battle, tiny, transparent globes of what appeared to be locations passed through Serge and the Time Devourer; these can perhaps be inferred as discarded timelines, possibly from Chrono Trigger. In any event, special conditions are needed to access the area. A catastrophic dimensional distortion threw Schala there, while Serge employed a Time Egg and special portal arranged by Belthasar to achieve passage.