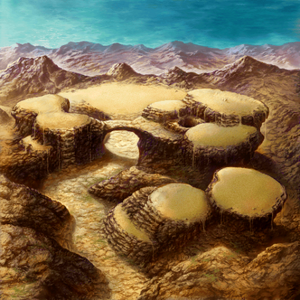 Earth Dragon Isle is a sandy, cavernous island created by FATE to house the Earth Dragon in Chrono Cross.

Consisting of dunes and rocky outcroppings on the surface, below it housed caves and streams of pouring sand; these runlets reemerged in quick dashes called sand boils. Access to the lower area was allowed only through descending through a large curtain of quicksand that served as the cave's center ceiling. The lowermost chamber existed to a huge cavern where the Earth Dragon resided; it included a bulky outcropping above and opposite the entrance.

After 1010 A.D., the Earth Dragon only existed in the Home World dimension; in 1020 A.D., Serge successfully challenged it to receive the Yellow Relic. The process of reaching the Dragon was not easy, and required the use of explosives and clever insertions into sand boils. The Explorer Corps explored the area in both worlds; their exploration in Another World was facilitated by the stoppage of the sand flows, which uncovered entrance to the lower caves in the center of the island. In this dimension, a beast called the Criosphinx nested in the isle after the Earth Dragon disappeared. It challenged trespassers with riddles of an Elemental nature.

Retrieved from "https://chrono.fandom.com/wiki/Earth_Dragon_Isle?oldid=29367"
Community content is available under CC-BY-SA unless otherwise noted.