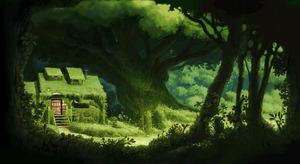 Forbidden Island is a small isle off the northeast coast of the main island of El Nido.

It contains a small house and several trees and plants, and its occupants vary across the dimensions. In Another World, it was occupied by a Demi-human who used to live around Arni before human settlements intensified in population. After Porre invaded Viper Manor, Solt, Peppor, and an unnamed Acacia Dragoon fled there to avoid capture. In Home World, the house was used by a young woman who lived on her own.

In 1017 A.D., Dario washed ashore, apparently having survived the doomed expedition to the Dead Sea undertaken by the other Dragoons. The woman fought to save his life, and he miraculously lived, though plagued by amnesia. He lived there the next three years; one day, Serge and other Dragons stumbled upon him there and attempted to jog his memory. After they failed, they brought Riddel and the Memento Pendant to him; when he remembered his life, the Masamune came to him and corrupted his mind. He attempted to kill Riddel, but was defeated in a fierce battle. He then came to his senses and departed to Viper Manor to survey the damage caused by its collapse. His caretaker was saddened, and wondered if he would ever return; she noted that she would wait.

Retrieved from "https://chrono.fandom.com/wiki/Forbidden_Island?oldid=30969"
Community content is available under CC-BY-SA unless otherwise noted.