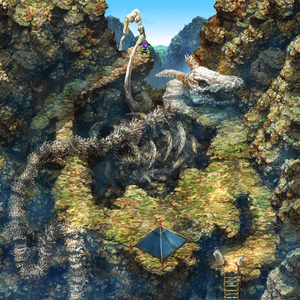 Fossil Valley is a location in Chrono Cross. A natural formation on the main island of El Nido, it houses mammoth avian skeletons and exotic flora.

It was probably given its name by settlers from mainland Zenan, who observed the skeleton of a large Dragon on a cliff in the area. Before dying, the Dragon laid a Big Egg. The valley hosts several wild animals, including some birds who nest on outcroppings. Bellflowers also grow in the valley, and were regularly picked by Glenn and Riddel.

In 1020 A.D., Skelly's skull made its way to the valley in Another World, causing a stir and prompting the Acacia Dragoons to call an exorcist. They turned away Greco, but allowed Serge to enter; he picked up the skull, picked a bellflower, and found the Big Egg left by the Dragon. Later, after Serge switched bodies with Lynx, Lynx allowed a few of his shadow cat demons to roam the area, making travel difficult and scaring away the villagers from Arni. The egg was later hatched in Fort Dragonia in Home World; upon returning to his mother's skeleton in the Fossil Valley of Another World, Draggy began crying. The spirit of his mother soon comforted him, giving him his BigBreath technique.

In Home World, Fossil Valley was closed off for travel by the Porre army. The guards fled after seeing Serge in Lynx's body, however.