The Green Dragon is a boss fought in Chrono Cross. He currently resides at Gaea's Navel in Home World and as part of Leah's recruitment in the party.. The player can steal the rare Green Plate armor from the dragon, which absorbs all Green elemental damage. After winning the boss battle, Serge obtains the Green Relic, and must continue the search for the other relics of the 6 Great Dragon Gods.

Setting a Carnivore trap will leave Green Dragon offenseless. As he will only be able to do his BadBreath attack (inflict's random status ailments), GreenField, and HealPlus once it's HP hit's critical. Green Dragon will use Carnivore if the field is left Green after it uses GreenField.

During the FMV cutscene as the six dragons were gathered, it was the Green Dragon who started the merging process by biting the right neck of the Sky Dragon who serves as the base form of the Dragon God and was covered with pink goo to scatter around at Sky Dragon's back which caused him to glow in a white light allowing Water Dragon, Earth Dragon, Fire Dragon and Black Dragon to be merge with them to become a Dragon God. 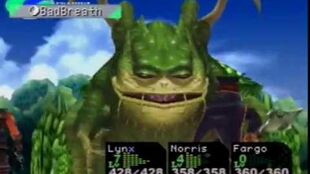