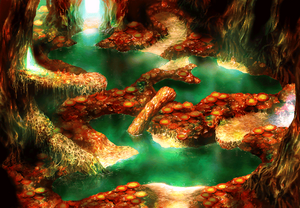 Hydra Marshes are a system of swamps and floral growth on the southeastern portion of the main El Nido island. The marshes have a unique ecosystem, as the Hydra who live there regulate the water's freshness, possibly by secreting chemicals or by other means. Many insects and reptilian creatures evolved in the swamp, thriving off its resources. Some lived high over it, as huge trees sported branches that extended to the sky, allowing even Human-sized organisms to scamper up their lengths. The swamp also played host to the Dwarves and their leader, the Dwarf Chieftain, who fiercely guarded the Hydra and viewed the marshes as sacred and a vital life force of the planet. Unfortunately, explorers from the Zenan mainland found that Hydra Humour works as a panacea for all kinds of diseases; they soon after began poaching the Hydra for the humour. This was lamented by the dwarves, who continued unsuccessfully to guard the numerous Hydra from falling victim to humanity. Their fight was a losing battle, however.

In Another World, the Hydra became extinct sometime after 1010 A.D.; the marshes subsequently degenerated as the water's PH dipped to acidic levels. Explorers still researched the area; Serge visited it as well to learn about controlling Wingapedes and find the Life Sparkle, an artifact that could imbue NeoFio with life.

The marshes of Home World managed to cling to life in 1020 A.D., though the Hydra had been reduced to one mother. Depending on game events, Serge killed the Hydra to save Kid or it perished by other means. If the former occurred, Razzly found babies within the Hydra's womb, meaning the swamp would survive. In any event, the death of the last Hydra provoked the dwarves to leave the marshes and declare Water Dragon Isle their new home. Serge later returned when he exited the Temporal Vortex after the body-switching with Lynx; apparently, when the dimensions split, the Hydra Marshes in Home World was somehow linked to the Vortex via a distortion (Sprigg lamented that the water for her juice came from the marshes upon discovering this fact). Serge then returned to use the Wingapedes to fly to Gaea's Navel and challenge the Green Dragon.