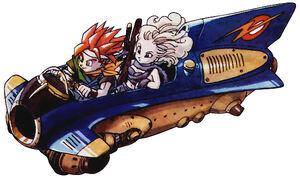 The Jetbike is a vehicle in the Future. Crono and company use it to race through Site 32 against Johnny. It requires the Jetbike Key to operate.

Once Serge and company reach Chronopolis for the first time, several Jetbikes can be found scattered throughout its ruined streets, but cannot be operated.

Retrieved from "https://chrono.fandom.com/wiki/Jetbike?oldid=40416"
Community content is available under CC-BY-SA unless otherwise noted.