Marge is Serge's mother and Wazuki's wife in Chrono Cross. She gave birth to Serge in 1003 A.D., and practiced being a good mother since. She is a villager of Arni and assuredly grew up there. In her early twenties, she married her husband.

When Serge is bitten by a panther demon in the year 1006 A.D., and Wazuki heals the boy and brings him back to his wife, he henceforward goes "missing" or is simply unaccounted for. Physically unscathed, Wazuki undergoes an odd transformation as FATE alters his mind and he becomes Lynx, thus leaving his wife behind.

Now a single mother, Marge continues to care for her son with strict yet encouraging discipline, even helping encourage his relationship with a fellow villager named Leena. Briefly Lynx visits her in Arni, but she believes her son is inhabiting the body. She tells him to follow his heart and bids him well on his journey.

In Another World, Marge dies shortly after Serge drowns. Since his grave marks him as seven years old and Marge was likely twenty when he was born, she died approximately at age 27; whereas, in the original time line, she is around age 37 and continuing.

Marge's dialogue at the game's beginning is identical to the dialogue of Crono's Mother at the beginning of Chrono Trigger and many other personality traits are shared between the two characters. Both are single mothers with one male son, who is selected as a hero figure. Also, both seem to have multiple feline companions.

Marge is a variation of Margaret, the Patron Saint of motherhood in Catholicism. 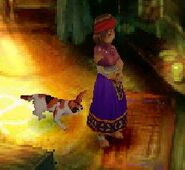