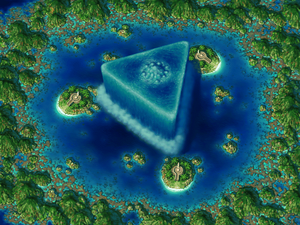 The Sea of Eden is a subsection of the sea of El Nido where Chronopolis was constructed following 2300 A.D. It was selected for its strange gravitational properties.

In addition to the island on which Chronopolis sat, three defense islands were constructed that, when activated, raised a triangular column of water above Chronopolis to protect and hide it. The Sea of Eden was hugely affected by the Time Crash, which shifted the place ten thousand years into the past. It then became partly the site of a battle between Chronopolis and Dinopolis; after the former achieved victory, Chronopolis terraformed and populated El Nido with its former workers. The Sea of Eden was then sealed off at the Pearly Gates, and the coral encircling it was made to cause instant death to any who touched it. Legends promulgated that the original settlers of El Nido came from the Pearly Gates, and that the Dragon God had sealed up the Frozen Flame inside the area. This worked to Chronopolis's favor, as the city would be stealthed and completely unknown among outsiders. Regardless, in 1006 A.D., Serge was taken there by Wazuki after a magnetic storm caused by Schala deactivated Chronopolis's defenses. Once they were back up, the area was sealed again. When the dimensional split occurred in 1010 A.D., the Sea of Eden in Home World became the Dead Sea, as the future of that dimension ended in ruin and the sea reflected this status.

The Sea of Eden remained dormant in Another World for the next ten years, save for trips in and out by Lynx. Eventually, Serge gained access by using a dimensional distortion from Home World; he attacked the Three Fates and forced his way in. FATE was defeated and the Flame stolen by the Dragon Gods; while the mystery of the sea had been penetrated by Serge, it still remained an enigma to the other inhabitants of El Nido.

This article contains additional images to further illustrate its subject. To view them, go to Sea of Eden's Gallery.
Community content is available under CC-BY-SA unless otherwise noted.
Advertisement