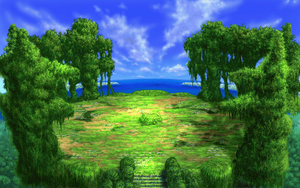 Sky Dragon Isle is an island sculpted on the ruins of Dinopolis to house the Sky Dragon, in Chrono Cross.

The architecture of the sunken Dinopolis allowed greenery and plant life to grow and seem suspended in the air; a huge staircase led to the top of the island where these huge arboreal growths occurred. The Sky Dragon occupied the area until the year 1020 AD. when the dimensions split; in Home World, the Sky Dragon was absent, which puzzled the explorers of the island. In 1020 A.D., the being Starky went there to mug explorers for their Star Fragments, pieces of his UFO that crashed in the El Nido Triangle. Serge eventually quieted the extra-terrestrial, who joined his party; later, NeoFio came to the island and rescued some butterflies, who gave her the BamBamBam technique in return. In Another World, the Sky Dragon continued to reign over the isle; she briefly left to rescue Serge from the Dead Sea's destruction before fighting the boy in person for the White Relic. After Serge infiltrated Chronopolis, Sky Dragon Isle was revived as Dinopolis, becoming Terra Tower; it rose from the ocean floor as the greenery was cast-off to reveal the dark stone. The Dragon God then reigned atop the isle.