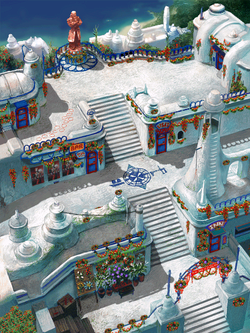 Termina is a location in Chrono Cross. It is the crowning city of El Nido, constructed on the northeastern corner of the isle after the settlement of the islands by colonists from mainland Zenan. To villagers in Arni, it was considered an affluent, gleaming city. A stark contrast to the wooden, natural town of Guldove, it was sculpted out of white stone and concrete in a terraced slope approaching the sea. At the base of the sea, where the superstructure met the water, several docks allowed quick access to the sea, while provisions were made above for many types of commercial shops and residential housing. Termina was also constructed to allow a stream descending from mountains to allow intercity travel and add to the stunning scenery of the sea; one could see the shore and visions of sun and sand from nearly anywhere in the establishment. At the head of the tallest echelon, with back to the sea, stood a statue of Lord Viper, cleaned daily by the Statue Cleaner. Under the leadership and protection of the Acacia Dragoons, the town flourished for one hundred years. In 1020 A.D., it prepared to celebrate its 100th anniversary; during that year, the city was host to Van and Gogh, a miser and painter, Zappa and Zippa, the blacksmith and his wife, John and his friends, a hero in training, Greco and Romana, caretakers of the cemetery, Lisa and her father, Elements salespeople, the Barkeep of the Dragon's Tail bar, famous for its squid-gut pasta, and many other colorful citizens. The festival was also slated to feature the rocking Magical Dreamers group, with Nikki and Miki at the helm. Once Kid traveled back in time to save Serge and the dimensions split, the history of Termina took a different turn.

In Home World, the Acacia Dragoons were led on a doomed expedition to the Dead Sea by Lynx and perished; this left Termina for the taking. Porre capitalized on their disappearance and invaded El Nido, placing Termina under martial control. The colorful posters and banners that once hung around the city's architecture were replaced by artillery and gun emplacements, and the air of the city become one of militaristic dullness. The disappearance of Karsh in the Dead Sea adversely affected Zappa, who eventually closed up shop by 1020 A.D. Gogh also became a painter instead of a financier, leading his son to explore ways of making money. Serge eventually visited the city to find Norris; while there, he recruited Zappa and Van into his party. Norris eventually loaned them his boat. In Another World, Serge found the city as it made preparations for the Viper Festival. He talked to Guile, Pierre, and later Nikki, eventually selecting one of them to infiltrate Viper Manor with. He also helped a salesman of Viper Churros set the price of his good, and witnessed a Mermaid trapped by an enterprising exploitation artist. Serge met Korcha as well; the boy later saved him after the Viper Manor raid turned sour. Serge then returned in a matter of days after Kid was found to be poisoned; he met Glenn, Zappa, and Greco at this time, and also contended with an overseer who complained about his docking there.

After Serge's body was switched with Lynx, he found Karsh and Zoah hiding at the Dragon's Tail bar; they related the story of Lynx's doublecrossing Lord Viper, and concocted a plan to rescue his daughter Riddel and reunite with the others. Porre had erstwhile conquered the city in the absence of the Dragoons; though it was not converted to represent its depressing counterpart in Home World, the activities of the Viper festival were nonetheless frozen to a halt by the presence of armed soldiers in every part of the city. The citizens did not take kindly to the soldiers, as the barkeep who shielded the Devas attested. Porre tried and failed to shut down Zappa's smithy as well; Serge later returned with Zappa from Home World so that the two could learn how to forge Rainbow Shell items.

Termina comes from the Spanish word, "termina", meaning to seize or end. It is likely an adaptation of "terminal", which means to be threatened by or at the final stages of death.