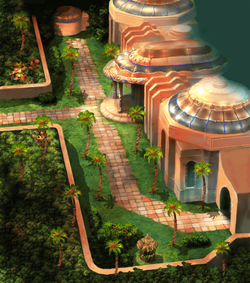 Viper Manor is the home of the Acacia Dragoons and the central base of operations for the protection and officiation of El Nido in Chrono Cross.

Constructed in year 920 AD. by the Viper Clan, it was made in an antique, ornate style, and was sturdily built out of stone. Specifically, the structure was erected overlooking a cliff, the Viper Manor Bluffs; this afforded it a scenic view of the sea. The manor also lay in close proximity to Termina, the chief protectorate of the Dragons. Its sewer system conveniently had access to a freshwater stream and the ocean and was built to link with Shadow Forest. Along with the sewer, a prison was constructed, featuring a few cells and a torture and interrogation chamber. The outside featured a lengthy wall and gate to ward off intruders; the courtyards inside were decorated with stone walkways and much greenery. Stables containing Dragons were also maintained on the outside, as was a watchtower activated at night to search for raiders. A guard of Acacia Dragoons was posted at the gates daily and across the courtyard each night; two combatants also stood near the front entrance of the mansion. Inside, curvy and detailed architecture was sculpted from marmoreal stone; the walls had a slightly beige hue, lending an aura of warmness to the environs. The seal of the Acacia Dragoons was emblazoned upon the main foyer's floor. From that focal point, two hallways extended out in the left and right directions. These hallways contained parlors built to house the Four Devas of the Dragoons; they were outfitted with expensive furniture and large, exquisite beds. At the end of either hallway were staircases leading to a basement complex that mirrored the floorplan above it, consisting of two hallways with a central lobby area.

This lower area served many functions for the Dragoons. One room served as a research laboratory, though it may not have always been intended for this purpose (it may have been outfitted with scientific tools only after Luccia came to live there). The main treasury and armory existed on this floor also; the treasure room consisted of several antique and pricey items, along with gold and other precious metals. The armory sported several weapons of war arranged on a wooden apparatus for holding them; the room was decorated with five suits of armor. The creators also added a special back room for the Viper's Venom, a fierce weapon used by the Viper Clan. Aside from these rooms, the basement housed the mess hall and barracks, which comfortably accommodated many Acacia Dragoons. The most interest aspect of the lower area was the center lobby; it consisted of metal bars to be used as a jail. On the first floor, a special Dragon statue was erected to be twisted in a certain pattern to allow access to the rest of the manor; if the combination failed, the ones attempting to gain access would plummet to the circular prison below. If the combination worked, access to the main hall of Viper Manor would be granted. This hall was used for formal ceremonies and events, such as the gathering of troops before an expedition; it was supported by eight pillars, and at the head of the room sat the throne of the Viper Clan.

Near the entrance of the main hall, two doors on the left and right allowed passage to the two towers of Viper Manor. One led to the study and library, which was constructed to have two floors and a central table for meetings. The creators carved this large table out of wood, etched the Viper emblem in the center, and employed candles to provide artificial light. The library was then outfitted with countless tomes of knowledge and history; at the very top stood a stained glass window depicting a woman. Interestingly, a secret passage was also hollowed out in the library; this later housed the Neo Epoch after Belthasar came to Viper Manor. The right walkway led to a special vault used to hold precious and meaningful treasures; the Memento Pendant was later interred here. Though this appeared to be the extent of Viper Manor's construction, the creators actually made the throne capable of rising up and down along the back wall. In the raised position, it granted access to the most secretive rooms in the mansion -- two parlors and the balcony of Viper Manor. One of the parlors was outfitted as the ruling General Viper's office and contained a bust of a famous person's head as well as a secret conference room in the back. The other parlor was probably intended as sleeping quarters for the family of the ruling Viper. The balcony contained its own small fountain system, which pumped water around the veneer. At night, the balcony would be lit up by green, ambient lights; this lent a romantic and serene effect to the platform. At the very top of the manor stood a small platform, built along with a third of the balcony. 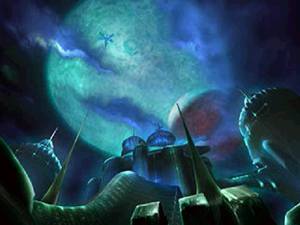 Thus concluded its construction; for one hundred years, it served as the foundation of the Acacia Dragoons, seeing the tenures of several leaders and Devas. The split of the dimensions in 1010 A.D. changed its history. In Another World, Viper Manor served as the meeting place between Lynx and General Viper; the former brought ghastly monsters with him to the mansion, making the hallways dangerous. In 1020 A.D., it was occupied by Belthasar, Orcha, Luccia, Norris (as a spy), Glenn, Karsh, Zoah, Riddel, the Shaker Brothers, Viper, and several other Acacia Dragoons. In Termina, Kid and Serge decided they would infiltrate the structure, and conspired with a third party member (Nikki, Guile, or Pierre) to find a way in. Depending on the options, Serge found his way in by directly lambasting the guards at the front gate, sneaking in through the well in the courtyard, or ascending the Viper Manor Bluffs. In any event, the invaders waited until the night before making their way through the mansion. Navigating the lawns, they discover the stable. Inside, the Stablekeeper agrees to give them a key to the front door of the Manor if they feed the dragon mounts there. Agreeing, they receive the Manor Key and attempt to enter the Manor.

When their attempt to open the main door failed and they fell into the prison, they made short work of the guards who confronted them and dressed up as Dragoons themselves. They then explored, getting in trouble several times. When they found the treasure room, they took an item only to be thrown into a trap in Luccia's lab; she tested a new creature on them, and let them leave. They also talked to Karsh and Zoah to learn more about the history of the manor.

as the group entered the library, where they found Belthasar, who spoke of Opassa Beach. Marcy then challenged them to a fight; they defeated her and found the raising throne in the main hall. Kid then confronted General Viper, who had been discussing matters with Lynx in the secret room behind his office. Lynx employed a shadow to fight the party, then had them surrounded by his shadow cats. Riddel came in to see what the ruckus was about; Kid quickly held her knife to her throat, offering her life in exchange for safe passage out. The entire group slowly backed out onto the balcony. There, Lynx quickly threw a dart containing Hydra poison at Kid; she was struck and wounded and fell over the balcony to the sea below. Serge soon joined her, leaping over to avoid capture. Viper Manor was afterward vacated by the Dragoons, who took up a defensive position at Fort Dragonia. The Porre military capitalized on the event, invading El Nido and seizing Viper Manor. They set up a base of operations there with the Porre Superior leading, and also brought in Guillot and Grobyc for combat testing. Norris attended as well. Riddel was caught in the resulting confusion, and interrogated; before she was to be tortured and killed, Serge returned to the manor with one of the Devas and effected her escape. He battled Guillot and Grobyc; the latter decided to help him after the fight, surmising that Serge was a worthy opponent. Guillot pursued them through the manor, even to the library; there, Grobyc goaded it to jump on the chandelier, which he then cuts down, sending the monster crashing to the ground.

The others escaped outside; as the Porre military swarmed upon the stable, the doors burst open and a stampede of Dragons flattened the troops. Serge's party then retreated to Hermit's Hideaway; the Porre military, embarrassed and without a solution to the question of the Acacia Dragoons' whereabouts, left a skeleton guard and withdrew its main force from the manor.

In Home World, the manor was vacated in the year 1017 A.D after Lynx led the Acacia Dragoons on a doomed expedition to the Dead Sea. Whether by fire or lightning, the manor somehow came to ruins in the following years, becoming a mess of broken stone. It was totally abandoned, even by the Porre army; only the lower dungeon survived. Serge first came to the Home World Viper Manor while exploring; he found a Revive Element in the dungeon. Later, after Dario was found and cleansed on the Forbidden Island, he came to the manor and spoke with the Acacia Dragoons from Another World. He noted that he would try and rebuild Viper Manor, and organize the Acacia Dragoons anew. Riddel suggested he create an orphanage in the meantime; he acquiesced, and soon the courtyard was full of swing sets, sandboxes, and other pleasurable pursuits made available to children. While Dario wasn't initially keen on babysitting, he realized the worth of restoring the Dragoons. This was later parodied in one of the endings, in which the children assemble before Lord Viper in the main hall and then run around playfully.