This article is about the location. For other uses, see Viper Manor Bluffs (Disambiguation). 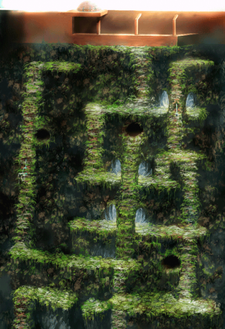 The Viper Manor Bluffs compose the cliff on which the back end of Viper Manor rests; they can be climbed by hand, though many dangers exist to potential invaders.

When Serge ascended it with Guile in Another World, he was assaulted by rocks rolled down by a zealous Acacia Dragoon, battled by beasts and nesting creatures, and threatened by jets of water that shot out of the passable stretches on the rock face. He eventually made it up and defeated the Dragoon throwing the rocks, though fierce birds assaulted him just before he completed the journey. The top balcony of the Manor extends over the bluffs; Serge jumped off it with Kid and another to escape Lynx, landing in front of the cliffs below.